We have started our journey in Bangkok (BKK) and then moved south as we were desperate for some beach time. Now that we want to go Cambodia it means we will have to go all the way up back to Bangkok and east to get to Siem Reap. We dont really want to fly during our trip – flying is boring, you can’t really see the country plus all the means of transportation that you have to take to move around add up to the whole experience.
With that in mind we settle on:
– getting a combined ticket for a boat from Koh Tao to Chumphon and a night bus to BKK;
– bus dropped us close to Khao San road so we took metered taxi from there to train station Hua Lamphong;
– from Hua Lamphong we took a very cheap 3rd class train which took us to Aranyaprathet, town which is the closest to the border with Cambodia;
– from the border we got a shuttle bus to the bus station and a minivan that took us to Sieam Reap.

It was a very long and difficult journey which tought us a lot about ourselves.

Koh Tao and other islands were so beautiful and chilled we didn’t really want to go back to Bangkok from which we only have bad memories of scams, over eager sellers and chaos. But all roads lead to BKK, what can you do‽

Boat with Songserm was great we got plenty of space on the upper deck of the speed boat and where watching Jack the Giant Slayer half the way. That took about 3h and it was around 6PM before we got to Chumphon. We had to wait there for about an hour for the bus so everyone got dinner. Options were limited to noodles or rice with veggies but it was fine.
Bus arrived around 7PM we got in and it was fine but around 11PM we were woken up, air con off, everyone off the bus – food time! Why‽ I want to sleep! There was also apparently a huge hornet flying around the bus, I am told, but luckily I didn’t know that then. Let say I’m not a fan of any crawling or flying creatures.

We got to Bangkok around 3.30AM and were straight away surrounded by tuk tuk drivers! No I don’t want a tuk tuk! No I don’t want to overpay! We were trying to be firm but asked one of the more persistent ones who kept standing in front of us How much? The lowest he wanted to do was 500 Thai Bahts. No thanks! We stopped a taxi. We asked him if he would turn his meter on, he laughed and shook his head, so we moved away and were waiting for a different one but he started calling us back. Meter on? Great. Have you put it on? It’s not on. Can you put it on? Thanks! In the end we got to the station for 53THB! Just £1. Tuk tuk wanted 10x more! We were actually pretty proud of ourselves! Finally we didn’t fall into their traps 😉
We got to the station about 4.30AM, got our tickets straight from the counter (we were there too early for all the hustlers that we had to go through last time). Paid 48THB for a single ticket for a 3rd class hard seat (meaning wooden bench, no padding) train which took us to Aranyaprathet in ‘just’ over 6 hours! 91 pence for 6h train drive! Ridiculous! We definitely got the local price this time!!!

Train was leaving around 6AM. We got some food, (not enough) water and hopped on the train. It was busy, hot and exhausting. Actually it probably wouldn’t be as difficult as it was if it wasn’t for Jakub’s feet and our overthinking.
Looking back at it, it wasn’t probably all that bad. What made it bad was that we freaked out. We didn’t sleep well on the bus, we were still very fresh to the whole traveling thing and generally scared of various things like: insanly big insects, strange animals that we don’t know anything about, the heat, the poeple that see us only as walking wallets, the weather… just in general scared. Plus it was hot, very very hot. 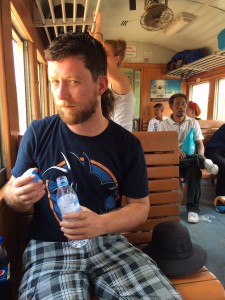 So at the station, Jakub changed his snickers for flip flops and noticed how swollen his feet are… when we got on the train it only got worse… The swelling was becoming bigger and bigger. Jakub started freaking out… obviously we are in the middle of freaking nowhere, with no option to leave the train or find any medical help if it keeps getting worse. No mobile coverage, obviously no wifi coverage. Can’t even google what you should do and why you get swollen feet. Obviously the heat, the trip… but it’s NOT getting better!!! So then I’ve started freaking out realising that if anything serious would happen to him… freaking heat stroke, heart attack or whatever the hell else… I would have no f*^%ing clue how to help him, how to rescue him?!??! What the hell could I do??? He is going to die because I came up with an insane idea that we should go to the other side of the freaking world just for fun! I felt hopeless, scared for him and angry with myself.
No google so I’ve texted Jakub’s sister (who is like a walking google) asking what you do with huge feet??? No coverege, no answer. Luckily people around us started getting a bit concerned and advising us on what to do to ease it up… feet up above the heart level, cold compress, drink more cold water etc. Feeling their concern we calmed down a little, Jakub sat on the floor with his feet up and spent most of the 6 hours like that. He got to the Aranyaprathet with big feet and sore arse.
So we got to Aranyaprathet. From there we were suposed to get a tuk tuk to the boarder. We’ve already read about all possible scams – and there is plenty on the Cambodia boarder inclding false boarders! Jakub was still not feeling great and after already 24hours on the road, we were not ready to start looking for a REAL Cambodian boarder. We decided to stay here for a night and get moving tomorrow. Lovely place that we stayed in, Le Blocs which was a hotel made of containers, very luxurious inside.

In the morning we got a tuk tuk ordered from the hotel, he was laughting when we said we would like to be taken to the REAL border. Which he did! Hurray! Faith in humanity restored!!! For a moment only. We still got scamed and paid 50% more than we should have for the visa. Well… I’m not really used to arguing or being tricked by supposedly goverment people in uniform. Nothing one can do about it. It is what it is. 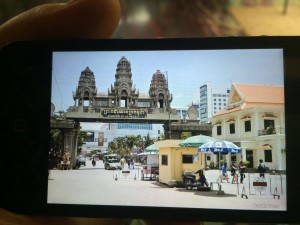 From the Cambodian border we got the ‘free’ shuttle bus that takes all foreigners to the special bus station for foreigners where tickets are much more expensive and we were advised to exchange the money for low rates cos we need riels! It turns out you can actually pay US dollars pretty much everywhere! But hey ho! We are white so we pay a diffrent price.

After a while they managed to get enough people to fill the mini bus so we were on our way again. Another 3 hours on the bus ahead of us. And what a 3 hours it was.

Cambodian roads are impossible and the driver was absolutely nuts! At one point the road just finished and we were driving like crazy on gravel. What‽ We are so gonna die here! What have I done. This time instead of trying not to scare each other, we started talking about everything that we don’t like, are scared of and how we feel about the whole travelling experience. I don’t like being constantly sweaty, surrounded by nature that produce flying cocroaches, jumping snakes, huge spiders and shit loads of other strange animals that I’m not used to. I mean our travel insurer said that while we are in Camodia if we need any medical assistance we should seak it in Vietnam or Thailand rather than here. Plus what are we talking about with roads like this we would die sooner than we would get to the hospital!!
I mean how come before we got here we’ve only read blogs saying how lovely it is and what a great adventure traveling here is. It’s bollocks. And yes, only now we are discovering that there are plenty of the blogs talking about how people were scammed, how they asked to get of a bus driven by a crazy driver cos they were scared for their lives etc.

There is NO ROAD! The ROAD HAS FINISHED and we are driving on sand!!! Somehow this bit was the last straw for me. I’ve had enough. I’m not sure about the whole travelling thing. What the hell are we doing here? Europe is so awesome! We have roads, we have hospitals around every corner, we have fairly affordable education and opportunities!

I had this image of myself in my head. An adventurous Anna that wants to take the road less travelled, go wild, backpack through the world surviving on few dollars a day. She is not afraid of anything and can put up with anything. She is the ROAD.

What a pile of shit. I am not that person. How disappointing. Backpacker? Hell no. I am a bloody tourist.

We arrived at Siem Reap bus station in the afternoon. We had a difficult and long journey, we were tired and grumpy. Before we managed to check into the hotel (which btw was very nice) it was already very late so we decided to just grab some noodles from some street stalls near by.

The neighbourhood was somehow strange, plenty of karaoke bars with big neons: ‘Karaoke & KTV’. As it turns out karaoke bars are more than usual just front covers for brothels, mainly with young girls who end up there either: sold by someone from her family, stay there to pay off family debts or simply can’t afford education which would let them learn some skills and can’t find other job. It’s also very popular unfortunately that mature white rich guys come here to find a nice young girl or a boy. Apparently pedophiles show up here quite often. Very disturbing and saddening.
There was a point when we got to a bar for a drink and saw a white old guy sitting with a boy… We obviously jumped into conclusion straight away and got really upset (Jakub wanted to punch him, which is not very much like Jakub) but it turned out it was a lady in her twenties or so. Still…

Also every time we go somewhere we are asked if we want a tuk tuk or a taxi or whatever so to add to the mix, we were also asked by young guy passing on a motorbike: ‘marihuana?’ followed by a long list of other substances he could offer. I couldn’t recognise names of half of them. Right, no thank you. We are off to our hotel. Let’s start again tomorrow Cambodia.